The ten contenders for the National Book Award for Poetry

New York, NY (September 15, 2015) – The National Book Foundation announces the Longlist for the 2015 National Book Award for Poetry. Finalists will be revealed on October 14. 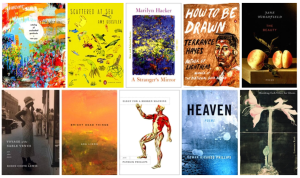 Ross Gay is the author of two previous poetry collections, Against Which and Bringing the Shovel Down. His poems have appeared in American Poetry Review, Orion, the Sun, and elsewhere. His honors include a Cave Canem Workshop fellowship and a Bread Loaf Writers Conference Tuition Scholar. He is an associate professor of poetry at Indiana University and teaches in Drew University’s low-residency MFA program in poetry. rossgay.net

Amy Gerstler is a writer of poetry, nonfiction, and journalism. Her previous poetry collections include Bitter Angel, winner of the National Book Critics Circle Award, and Dearest Creature, a finalist for the Los Angeles Times Book Prize. A Judge for the 2011 National Book Awards in Poetry, her work has appeared in a variety of magazines and anthologies, including The New Yorker, The Paris Review, the American Poetry Review, several volumes of The Best American Poetry, and Postmodern American Poetry: A Norton Anthology. She currently teaches in the MFA Writing Program at the University of California, Irvine. She lives in Los Angeles.

Terrance Hayes is the author of Lighthead, winner of the 2010 National Book Award and finalist for the National Book Critics Circle Award; Wind in a Box; Hip Logic; and Muscular Music, winner of the Kate Tufts Discovery Award. His honors include a Whiting Writers Award, a National Endowment for the Arts Fellowship, a United States Artists Zell Fellowship, a Guggenheim Fellowship, and a MacArthur Fellowship. Hayes was guest editor of The Best American Poetry 2014. He teaches at the University of Pittsburgh. terrancehayes.com

Jane Hirshfield is the author of eight books of poetry, including The Beauty; Come, Thief; After; and Given Sugar, Given Salt. A Judge for the 2003 National Book for Poetry, she has edited and co-translated four books and is the author of two major collections of essays, Nine Gates: Entering the Mind of Poetry and Ten Windows: How Great Poems Transform the World. Her books have been finalists for the National Book Critics Circle Award and England’s T. S. Eliot Prize; and named best books of the year by the Washington Post, San Francisco Chronicle, Amazon.com, and the Financial Times; and have won the California Book Award, the Poetry Center Book Award, and the Donald Hall– Jane Kenyon Prize in American Poetry. Hirshfield has received fellowships from the Guggenheim and Rockefeller foundations, the National Endowment for the Arts, and the Academy of American Poets. Her poems have appeared in The New Yorker, The Atlantic, The Times Literary Supplement, the Washington Post, the New York Times, Poetry, the Pushcart Prize anthology, seven editions of The Best American Poetry, and many other magazines, journals, and anthologies. She is a current chancellor of the Academy of American Poets, and lives in Northern California.

Robin Coste Lewis is a Provost’s Fellow in Poetry and Visual Studies at the University of Southern California. She is also a Cave Canem fellow and a fellow of the Los Angeles Institute for the Humanities. A finalist for the Rita Dove Poetry Award, she has published her work in various journals and anthologies, including The Massachusetts Review, Callaloo, The Harvard Gay & Lesbian Review, Transition: Women in Literary Arts, VIDA, Phantom Limb, and Lambda Literary Review, among others. She has been awarded residencies and fellowships by the Caldera Foundation, the Ragdale Foundation, the Headlands Center for the Arts, the Can Serrat International Art Centre in Barcelona, and the Summer Literary Seminars in Kenya. Voyage of the Sable Venus is her first collection of poetry.

Ada Limón is the author of three previous collections of poetry: lucky wreck, This Big Fake World, and Sharks in the Rivers. Her poems have appeared in the New Yorker, the New York Times, and American Poetry Review, among other publications. She has contributed essays and articles to a variety of publications, such as Oxford American, Guernica, Poetry, and American Poetry Society. She has received fellowships from the New York Foundation for the Arts, the Provincetown Fine Arts Work Center, the Kentucky Foundation for Women, and was a Judge for the 2013 National Book Award in Poetry. She serves on the faculty of Queens University of Charlotte Low Residency MFA program (Latin American & Charlotte) and the 24PearlStreet Online Program for the Provincetown Fine Arts Work Center. She lives in Lexington, Kentucky. adalimon.com

Patrick Phillips is the author of two earlier collections of poetry, Boy and Chattahoochee, which won the 2005 Kate Tufts Discovery Award; and translator of When We Leave Each Other: Selected Poems of Henrik Nordbrandt, which received the 2008 Translation Prize of the American-Scandinavian Foundation. His honors include both Guggenheim and National Endowment for the Arts fellowships, the Lyric Poeward from the Poetry Society of America, and a Discovery/The Nation Prize from the 92nd Street Y. His work has appeared in many magazines, including Poetry, Ploughshares, and The Nation. He teaches at Drew University and lives in Brooklyn, New York. patrickthemighty.com

Rowan Ricardo Phillips is the author of The Ground: Poems and When Blackness Rhymes with Blackness, and he translated Salvador Espriu’s story collection Ariadne in the Grotesque Labyrinth. A Judge for the 2014 National Book Award in Poetry, he has won several awards including a Whiting Writers’ Award, the PEN/Joyce Osterweil Award, and the Great Lakes Colleges Association New Writers Award for Poetry, and received a 2015 Guggenheim Fellowship. His work has appeared in The New Yorker and The Paris Review, and has been featured on NPR’s “All Things Considered”. He lives in New York City. rowanricardophillips.com

Lawrence Raab is the author of seven previous collections of poems, including What We Don’t Know About Each Other, which was a finalist for the 1993 National Book Award. He received the Bess Hokin Prize from Poetry magazine and grants and fellowships from the National Endowment for the Arts, the Massachusetts Council on the Arts, and the Guggenheim Foundation, as well as numerous residences at Yaddo and MacDowell. He teaches literature and writing at Williams College.

Publishers submitted a total of 221 books for the 2015 National Book Award for Poetry. Five distinguished Judges were given the charge of selecting what they deem to be the best books of the year. Their decisions are made independently of the National Book Foundation staff and Board of Directors; deliberations are strictly confidential. To be eligible for a 2015 National Book Award, a book must have been written by a US citizen and published in the United States between December 1, 2014 and November 30, 2015.

Sherman Alexie is a poet, writer, and filmmaker. He has published 24 books, including The Lone Ranger and Tonto Fistfight in Heaven and the 2009 collection of short stories and poems War Dances, which won the 2010 PEN/Faulkner Award for Fiction. His first young adult novel, The Absolutely True Diary of a Part-Time Indian, won the 2007 National Book Award for Young People’s Literature. His screenplay, Smoke Signals, won the Audience Award and Filmmaker Trophy at the 1998 Sundance Film Festival. www.shermanalexie.com

Willie Perdomo is the author of The Essential Hits of Shorty Bon Bon, a finalist for the National Book Critics Circle Award in Poetry; Smoking Lovely, winner of the PEN Beyond Margins Award; and Where a Nickel Costs a Dime, a finalist for the Poetry Society of America Norma Farber First Book Award. He is currently a member of the VONA/Voices faculty and is an instructor in English at Phillips Exeter Academy. He is also a former instructor for BookUp, the National Book Foundation’s program for middle school students. www.willieperdomo.com

Katha Pollitt writes the award-winning column “Subject to Debate” for The Nation magazine. She is the author of two books of poetry, including Antarctic Traveller, which won the National Book Critics Circle Award in 1982, and The Mind-Body Problem. She is also the author of the nonfiction
works Reasonable Creatures: Essays on Women and Feminism; Learning to Drive: And Other Life Stories; Virginity or Death!: And Other Social and Political Issues of Our Time; and Pro: Reclaiming Abortion Rights.

Tim Seibles is the author of five collections of poetry, including Fast Animal, which won the Theodore Roethke Memorial Poetry Prize and was a 2012 National Book Award Poetry Finalist. His honors include an Open Voice Award and fellowships from the National Endowment for the Arts and the Provincetown Fine Arts Work Center. He teaches at Old Dominion University, and has taught at the University of Southern Maine’s Stonecoast MFA program and at Cave Canem.

The National Book Award is one of the nation’s most prestigious literary prizes and has a stellar record of identifying and rewarding quality writing. In 1950, William Carlos Williams was the first Winner in Poetry, the following year William Faulkner was honored in Fiction, and so on through the years. Many previous Winners of a National Book Award are now firmly established in the canon of American literature, such as Sherman Alexie, Louise Erdrich, Jonathan Franzen, Denis Johnson, James McBride, Joyce Carol Oates, and Adrienne Rich.

This site uses Akismet to reduce spam. Learn how your comment data is processed.